Lying on her side yesterday evening surrounded by family, five-year-old Achan opened her eyes for the first time in almost five days. 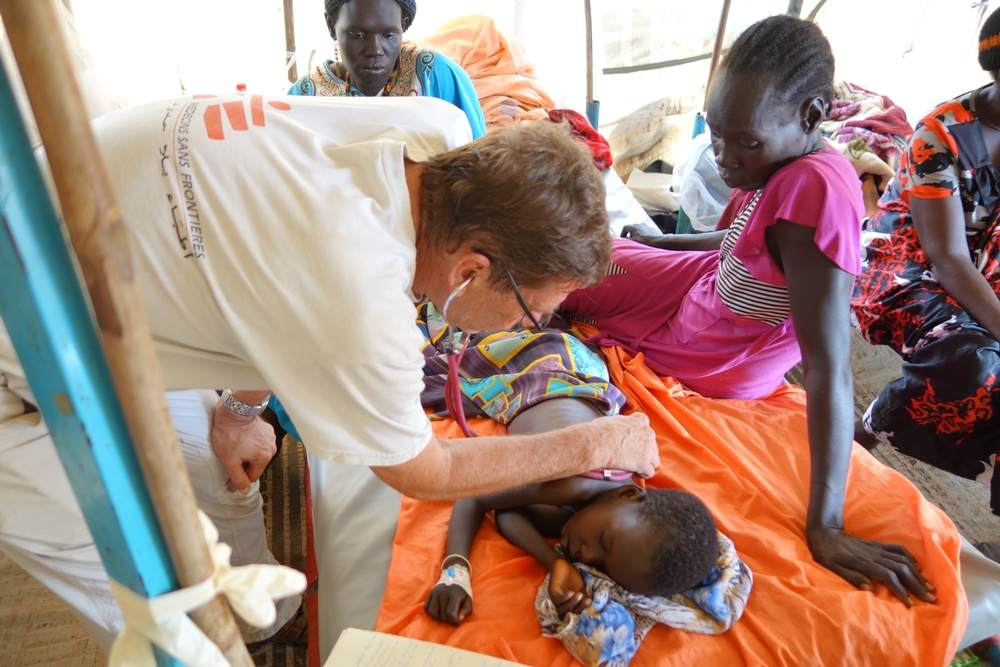 Achan’s family has been by her bedside continuously since she was admitted to Médecins Sans Frontières’ paediatric ward in Aweil Hospital, located in the malaria-prevalent northwestern quarter of South Sudan. The hospital is the main referral point for the most serious medical cases in the South Sudanese state of Northern Bahr Al Ghazal. In the hospital, Médecins Sans Frontières has over 160 hospitalisation beds, including three pediatric wards which have been at full capacity for the last two months.

When Achan arrived to the hospital, she was completely comatose. Her small body was convulsing with seizures and she was running a fever of nearly 40 degrees. “All of us were afraid she was going to die,” says her father as he gestures to the five family members around Achan’s bed. However, her prognosis remains unclear. Her fever has dropped, but she is still having periodic convulsions. Patients emerging from a cerebral malaria coma often suffer permanent brain damage. “Sadly, some children go into a coma and don’t ever fully wake up,” says Médecins Sans Frontières medical referent Dr. Cameron Bopp.  When Achans eyes do open, they appear vacant. She cannot eat or speak. On the opposite side of the hospital, three-year-old Ajeth sits in her mother’s arms as a South Sudanese medical staff pricks her finger to test the child’s blood iron. 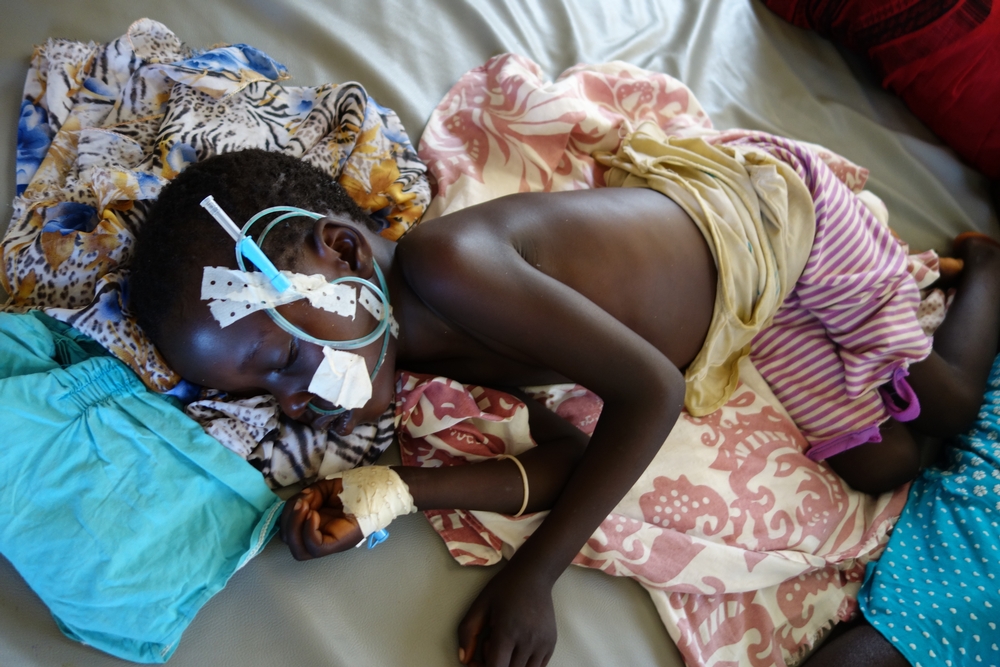 Ajeth was admitted to the hospital three days ago in severe condition with complex malaria. She was suffering from high fever, anemia and diarrhea. Médecins Sans Frontières staff treated her with an injectable malaria treatment, an intravenous drip for rehydration and a blood transfusion to stave off the anaemia. Now Ajeth is doing much better. The malaria has subsided and the blood iron test is good. She is ready to go home. Her parents do not have money for public transport so Médecins Sans Frontières gives them high-energy biscuits so Ajeth will at least have food for the long trip. It’s an eleven-hour walk.

“Last year, my son had malaria too, so I also brought him to MSF,” the mother explains. “In our village, the issue of malaria this year and last year is very serious.” Ajeth’s mother is right. In 2014, the western half of South Sudan was hit with an extraordinarily severe malaria season. In some Médecins Sans Frontières projects, the number of patients was more than triple the figures from previous years.  This year, malaria is spiking again.  In the first three months of the malaria season, Médecins Sans Frontières projects in the northwest of the country are treating just as many severe malaria patients as last year. But the rainy season has been slow arriving. If the rains pick up, the number of malaria cases is likely to increase even more.

“Sadly, some children go into a coma and don’t ever fully wake up”

Already, nearly 60 percent of admissions to the Médecins Sans Frontières project in Aweil are malaria cases. Médecins Sans Frontières is setting up a 20-bed overflow tent in the back of the hospital in preparation for even more patients in the coming months. The health consequences across the region could be severe. The only other hospital in Northern Bahr Al Ghazal is a one-hour drive from the Médecins Sans Frontières project in Aweil down a dirt road flanked by flat fields of sorghum and shallow pools of stagnant water. At the hospital, it’s a sunny morning and the 20-bed inpatient ward is packed with patients and a lineup is forming at the door.  Outside the ward, IV bags hang from trees like fruit.  Already, a handful of patients who can’t get beds inside the ward are being hooked up to intravenous drip from low-hanging branches. At least the hospital still has some drugs. Last year, many healthcare facilities ran out of malaria treatment entirely. 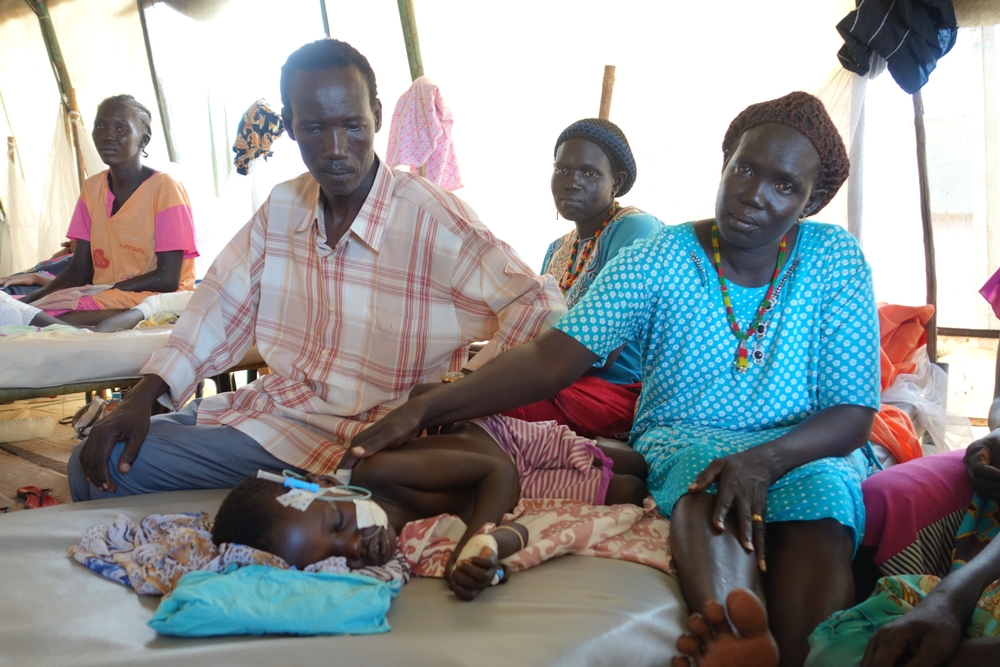 Earlier this week, this hospital ran out of medicine for simple malaria cases, but they still have intravenous quinine for treating severe patients. They expect a new three-month shipment of medicines from the capital in the next few days. “The state ministry of health has created a malaria task force to improve coordination,” says Adbi Fatah Mohammed, Médecins Sans Frontières’ outreach manager. “But capacity is a serious problem and there is a risk of running out of drugs later in the season.” It’s unclear whether the present spike in malaria in this part of the country will continue to rival the enormous volume of cases 2014, but trends and statistics mean little to those who are already suffering.

Back in the Médecins Sans Frontières in-patient ward, dozens of young patients lie in metal beds on foam mattresses. It is evening time and the ward is silent. A South Sudanese medical staff walks between two columns of sleeping children with a clipboard, checking on each one of them. At the back of the ward, little Achan sleeps with a transparent feeding tube protruding from her small, delicate nose. She has completed the final dose in her seven-day regimen of malaria treatment and her eyes are flickering open and closed. She has still not spoken. Still beside her, Achan’s family spends another long night at the hospital. They are waiting, hoping, she will wake.